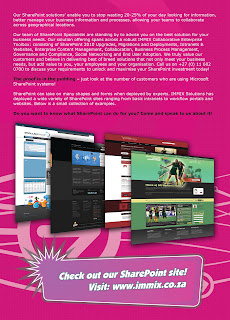 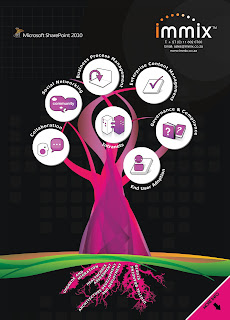 Today’s blog post is on a topic which is relevant to todays’ world. We read articles every day and we often find ourselves wondering how all this was created. Yes you got it right, it is a page. So if you are a SharePoint end-user, this post is dedicated to you – Thanks to IMMIX Solutions.
Without wasting any more time lets dive straight into it.
Create a SharePoint Page.
1.       Navigate to the desire site.
2.       Select Site Actions à Create Page.
3.       Fill out the form
a.       Title: This will appear at the top of the page.
b.      Description: This will appear in a search engine.
c.       URL Name: Keep it short - no special characters, spaces, or descriptive names.
d.      Page Layout: Select the page layout – e.g. Articles page layout in case you are creating a news article.
4.       Select Create.
5.       Save.
Please note that the page won’t be available to everyone not until it has been checked in. So use a check in option and click on publish to make it public.
by Sepaka Hlongwane (Consultant - SharePoint)
Posted by IMMIX at 00:20 1 comment:

So with the recently released Microsoft SQL Server 2012, I was pretty keen to get a virtual machine up and running with a working installation of CRM 2011 and SQL Server 2012.
The basic installation is no different to that of SQL Server 2008 RTM/R2 except for the fact that you need the updated CRM Installation files. This took a while to figure out as I had no idea that the installation files were updated in January 2012 already. I was so used to the CRM 4.0 install with Setup Updates that download from the internet.
First and foremost, download the latest CRM 2011 Installation files from Microsoft. These installs include Update Rollup 6 and Update Rollup 6 enables CRM 2011 to work on SQL Server 2012.
By running each of these executables, you will be prompted to specify a folder to extract the installation files to.
I pre-created these folders in a temp directory and canceled the installer once all the files were extracted. Note. The installer does not remove these files from the temp directory when it is canceled.
I located my install folder that I created from the original CRM 2011 DVD  and removed the “old” files from the following folders:
Then I copied the files from my temp folder structure back into the folders above so that I now have a “new” CRM installation DVD v05.00.9690.1992
After installing a fresh copy of Windows Server 2008 R2 with SP1 – x64 – Standard Edition and converting it to a Domain Controller, I installed SQL Server 2012 – x64 – Standard Edition. The basics here apply – Database Server, Full Text Search, Reporting Server, BIDS and Management Studio.
I created all my services accounts:
I created the Organizational Unit for the CRM Security Groups and all the other bits and bobs required for the install, such as adding the two service accounts (svc.CRMASync & svc.CRMApplication) to the “Performance Log Users” security group etc.
I have been able to successfully install CRM 2011 on SQL Server 2012 in one fowl swoop without any errors or complications. Note. This is just a lab and was created in an “all-in-one” server scenario.
Additional Important Notes.
Update Rollup 6 enables CRM 2011 to work on SQL Server 2012 but is not fully supported. http://support.microsoft.com/kb/2686619

We at IMMIX Solutions are forward thinking when it comes to Microsoft SharePoint and perceive the product as phenomenal platform that supports the development of “best of breed” internet solutions within the walls of the enterprise. SharePoint promotes healthy collaboration, business optimisation and productivity. It also encourages the collection of collective intelligence via informal and formal structures, groups and communities, centralised with the basic business need to communicate, share and learn.  Enterprise collaboration is the 21st century business performance accelerator.

With the growth and expansion of our SharePoint Practice at IMMIX Solutions, we have a new leader at the helm. Claudia joined IMMIX in January 2012 and has brought a wealth of insight, experience and out of the box thinking into the team garnered from more than 15 years dedicated to Organisational Intelligence, Knowledge Management and Operational Excellence.

Our focus is centered on driving an innovative business strategy and increasing customer market share through alliance and partnerships with respected service providers and solution verticals. But as much as we are focused on our strategy, what is a strategy without an excellent and dedicated delivery team.  We are first and foremost committed to service delivery and excellence within the SharePoint team. Our strength and ability to predictably deliver successful and cost-effective projects resides in that we have a passion for what we do and that will never change.

We do have a strong customer centric approach are passionate about doing things the right way, understanding the customer pain points and ensuring that the solution is made to fit the client’s business needs and not the other way around.

Together as a team have already completed numerous brainstorming sessions, unpacking what we do, asking ourselves why we do it?. As a team we are proud and excited with the outcomes. IMMIX Solutions SharePoint Center of Excellence has emerged with dedicated Analysts, Architects, Engineers and Product Specialists. Together coupled with a rich, diverse and competitive customer offering. As a team we are confident that not only do we bring the expertise, technical skills and know-how but also an deep rooted understanding of organisational intelligence and the human and business processes that drive business and unlock value and success for SharePoint projects.

In upcoming blog posts, we will be discussing and unpacking the practical approach, implementation and business value of DocAve 6, K2 Blackpoint and Blackpearl as well nGage Intelligence. Be on the lookout for some awesome case studies, success stories and reviews that we will be sharing. You can also follow thought leaders from IMMIX Solutions Sharepoint Center of Excellence on Twitter. @MrThirsty – Andrew Shough @Collaboratrix – Claudia Correia de Araujo and of course follow the organisation @IMMIX – IMMIX Solutions for our news updates, community initiatives, marketing events and so much more.
Posted by IMMIX at 01:36 1 comment:

Welcome to the world of IMMIX SharePoint

Who are we?
IMMIX is a Microsoft partner and we are part of the Microsoft President’s Club for 2011 which includes the top 5% of Microsoft partners worldwide. IMMIX currently has two offices – the head office in Johannesburg and an office in Cape Town. We strive to provide business software applications that help clients to better manage their business, their customers, their software, and their information. Ultimately your business goals = our business solutions!

The goal of SharePoint Practice is to provide our clients with great business value with our solutions, be it a simple or a complex solution that has auditing, governance, and legal compliance.

IMMIX
Rivonia, Gauteng, South Africa
IMMIX Solutions specialises in business software applications that help you to better manage your business, your customers, your software and your information. We are leaders in the design and delivery of adaptable, integrated technology solutions for business management. We are a Microsoft Certified Partner (Gold: CRM, ERP & Digital Marketing), with specialisation in Microsoft Dynamics — a line of business applications for the mid-market, upper mid-market and enterprise markets. Our core competencies include: Customer Relationship Management (On premise, hosted and mobile CRM), Enterprise Resource Planning (ERP - Financial and Resource Management) and SharePoint (BPM, Portals and Scanning) and Licensing (Microsoft and Adobe).